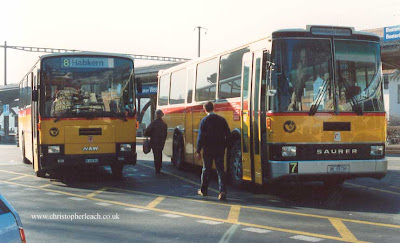 Interlaken is of great interest to the rail enthusiast as a number of different coloured narrow-gauge companies terminate here along with the only State Railway SBB/CFF narrow line over the Brunig Pass to Luzern. For myself though Interlaken had special status as it was one of the places where The Post Office itself had a bus garage. In 1964 the allocation here was No's P24131-2, a couple of recent Saurer Alpenwagens. But as elsewhere in Switzerland like for instance those garages in Zernez and Sierre smaller operations were transfered over to local PAH Contractors wherever possible. Working the two Post Bus routes from Interlaken West Station were two Ramseier and Jenzer bodied Contractors Post Buses, a Mercedes bases NAW and a fine Saurer RH.
Posted by christopher at 03:02