Shall I take a photo or just scratch my head? 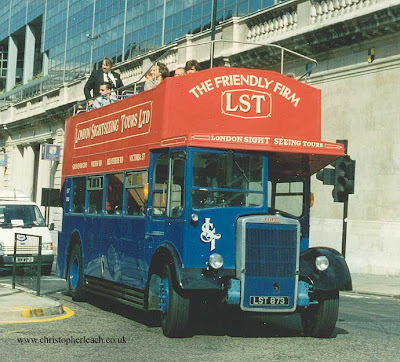 The various London Sightseeing Tours operations have seen a good variety of vehicles over the years and as well as there being many normally retired types like Metrobuses and Fleetlines being offered a lifeline one could also see some surprising vehicles like FRM 1 the rear-engined Routemaster, BMMO D9's and massive three-axle former National Express MCW Metroliner coaches. However if one didn't know already this re-registered old Leyland working in the Nineties was a bit of an enigma. But experienced older enthusiasts might just be able to make out some the remaining Park Royal features from this former Barrow Corporation Leyland PD2 of 1958 which had been retained as a trainer . London Sightseeing Tours might have been friendly but I have to say they were not very kind to this bus, but the way I see it is that at least another fine old Leyland half-cab was saved for a few more years from the breakers torch.
Posted by christopher at 08:54