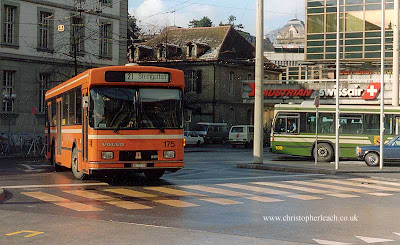 Bern relied on the Zurich manufacturer FBW for both it's trolleybuses and motorbuses and when they were no longer available in the early-Eighties a few odd vehicles by other manufacturers were taken into the fleet for evaluation. As well as a small batch of Mercedes articulated buses that were always out in use there were a couple of normal length rigid buses too both always painted in that uninspiring almost uniform 'orange' that otherwise had almost disappeared Although I never saw the Mercedes out on the road a Vovo B10M looking slightly different to the Bern Standard did appear in service once and I managed to snap it. This company prototype led to the purchase of two batches of these nice buses plus some artics also from Volvo and one of the former can also be seen outside the Bahnhof looking very much smarter in the more usual Military Green and Cream which was reintroduced after a Nationwide scheme to paint all urban buses orange was discarded.
Posted by christopher at 10:55