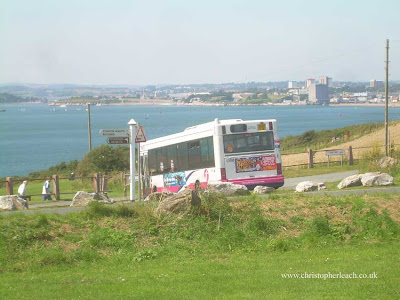 Well Jennycliff magnificently overlooking Plymouth Harbour from across the bay is not quite Paradise but almost. But whose complaining most cross town bus services in our cities go from one grey housing estate to another or to maybe one of those misnamed Industrial Parks or almost as bad some nondescript shopping centre. At Plymouth on the other hand not only is their stunning countryside on every doorstep it is almost wild. Many people knock the First Group's Barbi livery because it is rather dull, but whether this is a quality or weakness I'm not too certain but one doesn't seem to notice it after a while. It certainly fit's in well with the soft stone and green colours of the South West looking very much at home, but it should look okay here for it is not so different from that employed by Western National following Deregulation, one of the important Founding Father's of Badgerline who eventually evolved into First when it joined up with Grampian. Not surprisingly as this is First Group's least profitable operating area there are no shortage of second-hand buses being cascaded down from the North like this Plaxton Pointer bodied Dennis Dart with it's Yorkshire Registration S337 TJX making me think of the old Halifax numbers.
Posted by christopher at 11:31