Exeter: Where have all the minibuses gone! 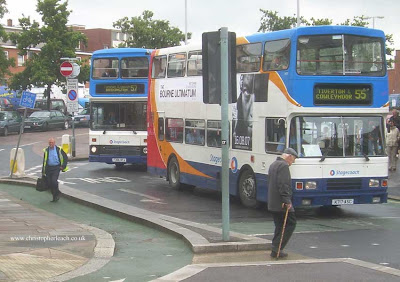 How times change for it doesn't seem that many years ago since Exeter and the Torbay area of the much loved former Devon General was plagued by hundreds of Harry Blundred's Ford Transits and Mercedes 608's. Today now the South Western outpost of the huge Stagecoach Empire where there is a bus for every job what a wonderful sight to see so many double-deckers again, and even like this former 'Stagecoach Fife' Alexander R-Series Leyland Olympian affording enjoyable upstairs rides right out into the countryside as in this instance eastwards to Tiverton. Behind it is a Northern Counties bodied Volvo Citibus one of a batch of these buses purchased when Southdown was privatised dating from 1988 and still going strong nineteen years later.
Posted by christopher at 11:29