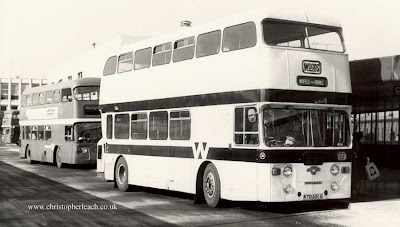 In 1965 an Atlantean looking very much like a Sheffield Corporation bus wearing both that city's latest style of Park Royal bodywork with it's angular raked-front and cream livery entered service as a Leyland Demonstrator. I remember seeing it at work in Brighton during the Christmas Holidays of 1966-7. I don't know how much of this was pure coincidence but it was later bought by the tiny concern of J.Wood who employed a similar cream and black livery which was quite rare anyway. Also Wood was based not too far from Sheffield either at Mirfield in the West Riding of Yorkshire and this once well known bus was seen in Wakefield Bus Station at the end of the Seventies.
Posted by christopher at 12:15