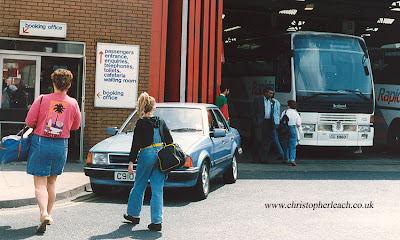 In a way it's a bit sad that Digbeth is going to be rebuilt as a new Coach Station for there are no former Midland Red garages still in use in the area taken over by the West Midlands PTA, but at least it will stand on the same site. The 'National Express' brand is about all that is left from the NBC era of the Seventies but the faster 'Rapide' named coaches are now just a memory too. Here looking a bit upmarket for these duties was a Northen General Leyland Royal Tiger Doyan coach which bore the Registration A722 ANL when new.
Posted by christopher at 07:48