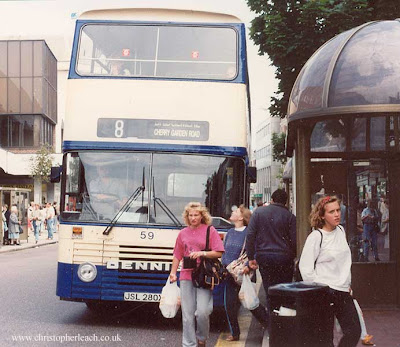 At one time few proud Municipal or larger operators apart from more down to earth Independents indulged in second-hand purchases, but following Deregulation money was very tight and it was a constant fight for survival as your biggest enemy might be your previously friendly big neighbour or some cheeky have-a-go newcomer with some old Leyland Nationals trying to smoke everyone out as they hoped to sell out and thus make a few bucks. But hardly anyone would have realised that this Eastbourne Borough Transport East-Lancs bodied Dennis Dominator had come all the way from Dundee having been new to Tayside Regional Transport as not only had they bought nine similar buses the same bodywork appeared on EBC's main fleet of Atlanteans. At Dundee it had been one of six similar buses but obviously that operator didn't think much of them compared to it's many Volvo Ailsa double-deckers and in truth apart from Leicester and the South Yorkshire PTA few did.
Posted by christopher at 10:47