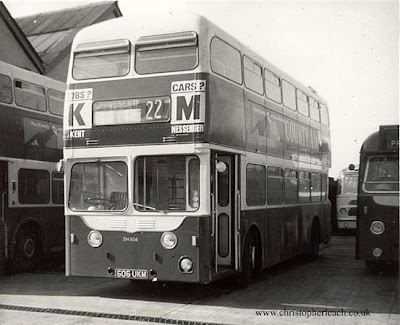 Maidstone and District had a high concentration of services in the Medway Towns and there was also a garage further up the Thames Estuary at Gravesend not far from where London Transport marked the boundary of it's Country Area with a garage at Northfleet with an allocation in 1974 of 41. The M&D allocation was a bit smaller and I would guess holding about thirty vehicles in 1967 when I visited it. Typically there were plenty of AEC Reliance OPO buses and coaches but some Leyland Atlanteans too like DH 606 from the final batch of 1962.
Posted by christopher at 13:22