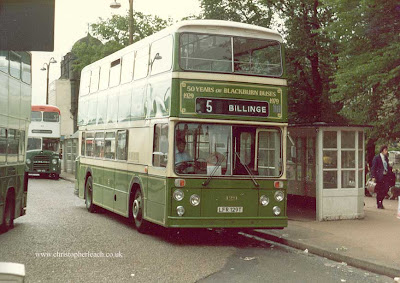 Sadly next year Blackburn Corporation Transport won't be able to paint one of it's buses in a 80 Years of the town's buses livery for it is another former Municipal that has sold out. I always think though that these specially painted buses in historic liveries add interest to a fleet and I think with the large faceless transport groups owning so much, it is even more important for them to show a more human side proving to the public that they enjoy being a part of the local community. In recent years East Lancashire Coachbuilders had rather a quirky hit and miss look to it's bus designs but when this Leyland Atlantean was bodied in 1979 they were still building traditional crisp looking designs that really looked good in these historic colours. This bus was photographed within about a year of entering service as the last town's 1960's Leyland PD2's with an even nicer style of East Lancs body like 1964 No.43 were soon to be withdrawn.
Posted by christopher at 15:14