From Gargrave to Uttoxeter 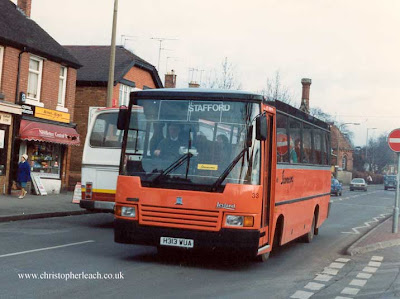 The small Independent Pennine of Gargrave had a dozen buses all of Leyland manufacture. Started in 1925 it had been a loyal customer of that concern for many years, but that was all to change when it bought a new pair of Leyland Swifts which were obviously nothing but trouble. This started a rout and as well as these two Terrier truck based vehicles just about all the trusty Leopards were quickly sold off too. They were replaced by short Leyland Nationals which like the Swift wasn't quite a pedigree Leyland bus either. The two Swifts though were quickly snapped up by Stevensons of Uttoxeter who already had some quite satisfactory examples of this not so sophisticated conversion to bus. Wadham Stringer bodied H313 WUA was quickly pressed in to service still wearing Pennine's attractive orange and grey colours which itself was inspired many years ago by the Leyland Motors football team coach. Although based just outside Pennine's services ran into Skipton which was the sole Yorkshire outpost of the vast Ribble empire, and the local Chaserider Duple bodied Leyland Leopard No.33 is passing one Saturday in Stafford was once part of that large Ribble fleet.
Posted by christopher at 08:45