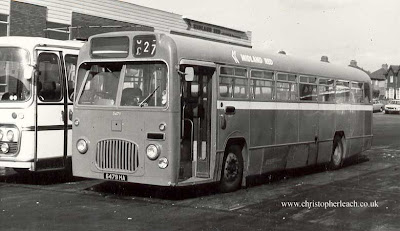 On 1st January 1979 just six of the 262 BMMO S17 buses delivered between 1963-1966 were still in service with Midland Red. One of them was 5479 from the first batch saw much of it's service at Hinckley but it was seen toards the end of the year at Cannock whose spacious forecourt did and still does attract withdrawn buses. I didn't think much of the NBC Poppy Red livery but one could argue that the white band did a lot to brighten the appearance of many Midland Red buses without spoiling the old image to much.
Posted by christopher at 09:05