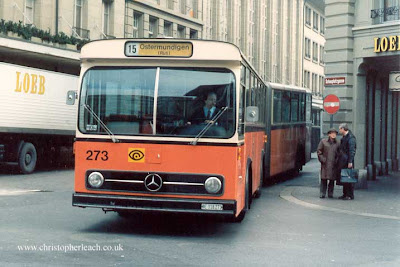 For many years the city of Bern stayed faithful to FBW for it's buses but when they ceased manufacture they turned to Volvo. However a few other vehicles were tried including about three Mercedes-Benz articulated buses with Swiss bodywork. They looked a bit different from the rest of the fleet but No.273 stood out even more as it received a rather unorthodox but quite attractive version with black lining-out of the universal orange town bus colours adopted in Switzerland for a while before thankfully being dropped again.
Posted by christopher at 06:50