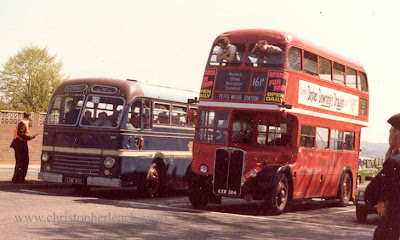 One of the best known bus routes in the UK is the marathon Birmingham 'Outer-Circle' Number 11. As a boy a friend of mine took this bus from near Selly Oak to see Aston Villa play but as he caught it going in the wrong direction it was already Half-Time or even later when he finally arrived there. As a celebration of this bit of heritage local transport groups arrange a transport rally to follow the route and in 1979 I photographed two classic buses from the early Fifties, one a celebrity through sheer numbers and a true postcard-celebrity whilst the other a Duple Roadmaster is special because of it's actual rarity compared to it's huge success as a Dinky Toy. In Birmingham RT 1658 looked a bit of place as did South Notts of Gotham Leyland Royal Tiger but it wasn't really as South Notts LOE 900 was new to Jackson of Castle Bromwich in 1951.
Posted by christopher at 06:43