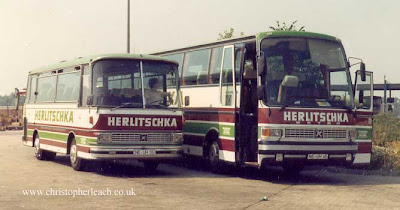 Humorously the two Setra coaches resting at a Services on the Autobahn in 1982 remind me somewhat of a mother protecting it's still vulnerable young baby elephant. I'm quite partial to Setra's because like BMW and Mercedes cars no matter their age there is always a strong family resemblance between the various generations of design. The big coach has that ultimate classic sleek look the manufacturer ultimately achieved whereas the smaller coach reflects the less rounded look that dates right back to the Seventies or maybe even the Sixties. It's a pity today in Europe too many coaches carry basically a monotonous dealer white whereas in the past part of the joys one could take from being an enthusiast was recording the various smart liveries like this one of Herlitschika. Who said opposite colours should never meet, subtly done it's very striking indeed.
Posted by christopher at 15:36