More from Warrington two weeks ago 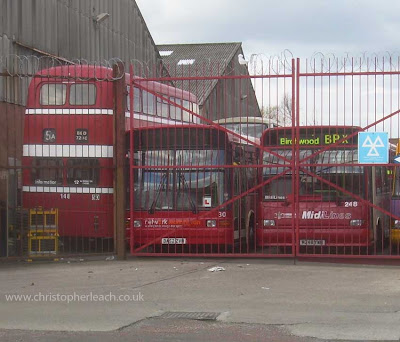 Rather like when panning for gold where one might find the tiny valuable nuggets at the bottom when it comes to gems of buses they too are usually hidden away out of sight down the bottom. This is certainly the case at Warrington where they hold on to a fine relic of the Sixties, a Corporation rarity a 'Special' 1965 Leyland Titan PD2.40 with a narrow 7.ft 6.in wide East Lancashire bodywork. Now carrying both fleet-numbers 50 and 148 it was originally the first of a batch Nos.41-52. As elsewhere the Dennis Dart figures widely in this fleet and two different styles by Marshall of Cambridge can also be seen here down by the back gates of the Wilderspool Causeway Garage.
Posted by christopher at 09:26