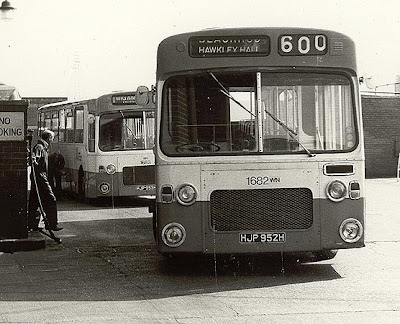 Wigan Corporation was one of those quite numerous 100% all Leyland fleets and not surprisingly build up a large fleet of Titan PD2 and PD3 buses but towards the end of the Sixties these gave way to the Atlantean plus two Panther Cubs and a larger batch of Panthers. These twelve more powerful Panthers were numbered between 1680-1691 and carried locally built Northern Counties dual-entrance bodywork. Nos.1682 and 1683 were being filled up together at the end of their busy day at the Melverley Garage, somewhere I never got turned away from even after the operation passed to Greater Manchester PTE in 1974
Posted by christopher at 07:50