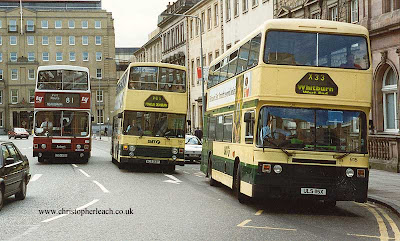 Edinburgh has always been a great city to see a kaleidoscope of colours and interesting buses. During that NBC poppy-red and leaf-green smokey Leyland National era much of England and Wales became rather boring whereas north of the border the Scottish Bus Group retained much of it's fascinating old variety and colourfulness. Sadly as the big bus groups tightened their grip the universal one livery corporate image took over again and this time it encompassed Scotland too with Aquamarine, Barbi and those Stagecoach Stripes. I was up there in 1997 when there was an enjoyable honeymoon period when unlike Stagecoach the First Group retained individual liveries on all but new buses whilst at the same time preserving earlier liveries albeit with a corporate makeover and logos. Unfortunately it had to end as many of the group's vehicles looked just fine like these examples SMT 915 and 923. One an Olympian carries an ECW body whilst the other bus a Metrobus has an Alexander R Series body just like the second Leyland Olympian in this view No.324 in the always smart Edinburgh City Lothian fleet.
Posted by christopher at 11:49