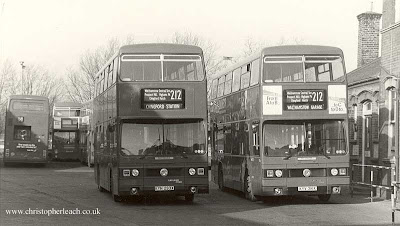 Walthamstow Garage once housed trams and then trolleybuses before they were replaced by new Routemasters as the Electric Era vanished from the still quite empty London streets at the end of the Fifties. By the Eighties the eighty or so buses carrying the WW Walthamstow Garage Code next to their running-numbers were new Leyland Titans the last double-deck bus built specifically for London Transport. New deliveries were shared with the cheaper off-the-peg MCW Metrobus which proved to be the more popular and these rather grand Leylands were slowly phased out in mid-life whilst the Birmingham product enjoyed long busy lives in the Capital. Of course being a lot more rugged than the Provincial equivalent the Olympian, these fine even better buses complete with the accountant and engineers friend, the legendry but old-fashioned Gardner Engine were quickly snapped up like the DM Class London Daimler Fleetline's before them that suffered the same fate. Behind T293, T316 and more Titans is one of the few luckly Fleetlines that survived with LT largely as trainers.
Posted by christopher at 04:18