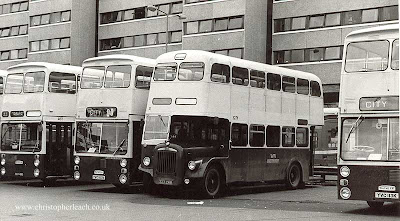 Think of Coventry and it sums up great engineering names like Coventry Climax and of course Daimler. By the Eighties the Fleetline now named the Leyland Fleetline had ceased production and even the final days of those wonderful half-cabs like this MCW bodied Daimler CVG6 No.327 of 1963 was marred by an indifferent livery imposed on it's by WM the new Master's of the former Coventry Corporation. I have to say West Midland PTA's Birmingham inspired blue and cream colours weren't the worst by a long way and even in it's way quite attractive, but as elsewhere it's cheap and cheerful image seemed to echo a new indifferent world where sadly Municipal Buses were no longer a part of civic pride but mere boring machines to take uninterested folks from A to B.
Posted by christopher at 03:12