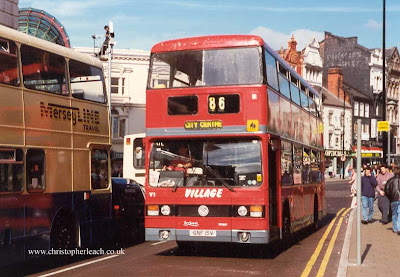 Like other cities and towns in Britain Liverpool saw some intense bus competition on it's streets in the 90's. As well as the large players some remained relatively unknown like this company called Village whose former Greater Manchester Leyland Titan TL11 4015 now bore a livery slightly reminiscent of that once worn by the old Lancashire United Transport of Atherton. Manchester like the West Midlands fleet whose former Daimler Fleetline can also be seen as a Merseyline Travel bus, only took small trial batches of these London inspired buses and the fifteen GMT buses delivered in 1978 and 1980 utilised the engines offered by both Gardner and Leyland itself.
Posted by christopher at 11:00