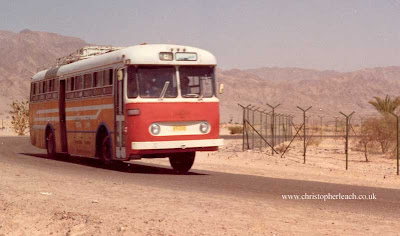 Well it's not quite a British Tank charging across the desert but Leyland did build them during the war when bus production stopped. Lucky not only was I was able to visit Israel during one of it's more peaceful periods also by then getting quite elderly Leyland's still seemed to outnumber other makes except of course on prestige city and top-line work. But despite it's age and well used look this Leyland Royal Tiger Worldmaster was still able to turn out a good performance as it approached it's destination the Kibbutz of Neviot on the Red Sea, South of Eilat. Even though it was way back in the Early-Eighties I can still hear in my head the roar and transmission whine of TAN 89-256 creating a minor sand storm.
Posted by christopher at 03:35

89256 was one of the first Royal Tigers built with a "modern", coach, body. The body was soon nicknamed "Camel" (Hebrew: Gam-al), thanks no doubt to its frontal looks. This specific type, built by Ha'Argaz in 1962-64, was produced in 95 copies. Other Camels were assembled to mid-1973.

Thanks, your background detail it helps to make the posts more interesting. These were favourites of mine as I found them very attractive especially the nicely rounded rear end, and I had an enjoyable ride on one from Tel Aviv down to Eilat sitting near the rear above the exhaust listening to it's cackle through the open windows. No it's not a coincidence that there are so many Leylands posted on my blog.