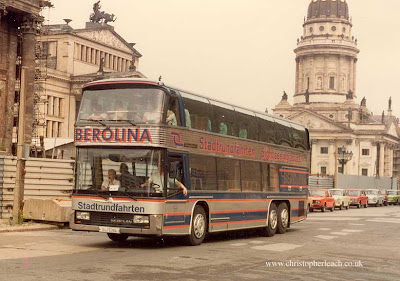 Even before the notorious Berlin Wall came tumbling down and rebuilding on the prime building land started bemused visitors still found the city resembled something of a building site particularly in the East where restoration on the grand buildings it inherited progressed at such a very slow pace trees even grew on their rooftops. So it was a good thing that the West Berlin tourist bus firms like Berolina had big Neoplan double-deck coaches to peep over the top of those ugly concrete block walls at the city's architectural marvels. Probably the pace of work was hotting up as Belin was getting ready for celebrations of it's Charter but in the East one would never have guessed. Still to be fair it could have been Sunday but I didn't usually go over the Wall on Sunday so no this was a normal working day.
Posted by christopher at 07:15