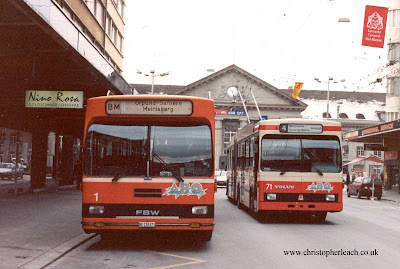 If you stand outside the railway station in the Swiss town of Biel there seem to be a lot more trolleybuses than motorbuses but a fleet total 22 isn't really a large number is it. But No.1 taken in 1993 was an FBW motorbus whilst the electic powered obus as they are called in German dates from 1989 and carried locally built R & J bodywork.
Posted by christopher at 08:50