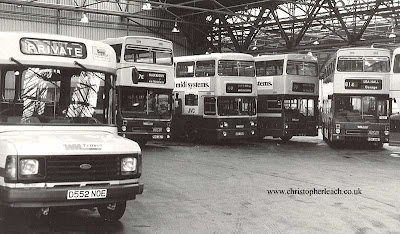 Dating from about 1954 Kitts Green was opened to serve the rapidly expanding housing estates around Castle Bromwich. This was the newest garage of Birningham City Transport and I believe it is one of the few that is still operational today. I only visited it once but the staff were very welcoming and I tried to take some photographs inside the fairly dark building. In the Mid-Eighties the Leyland Lynx had yet to appear but the Ford Transit bread-van was in evildence. As well as No.552 local enthusiasts might be interested to know that Metrobuses 2100/486/582 and Fleetline 6596 make up the scene.
Posted by christopher at 08:11