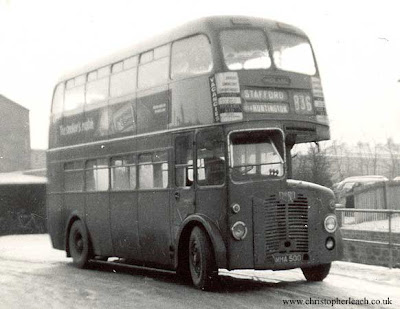 When we first became interested in Midland Red Buses by spotting the numbers we got a slightly bigger thrill when we saw the one's with the nice numbers and I can still remember the days when I saw them, C1 3333 at Hereford, 4444 at Sutton and later 4999 and 5000. But it's a good thing they never had a Fruit Machine in the canteen at Stafford Garage for the staff would never have won anything. With a fleet of forty-five buses which were always being swapped around you would have expected a reasonable list of the special looking numbers, but on reflection there was hardly anything at all. I remember we had C1 3337 for a short time and at the end of it's life FEDD Floater No.2345 appeared too. But the best we could do was a second-hand D5 No.3500 that was at our garage for a few years having been new to Kidderminster who also had D7 No. 4500. I'm afraid this isn't one of my very best pictures for like a lot of young teenagers I was given my very first camera for Christmas in 1963 and immediately went out and wasted some precious film. But it does confirm one thing and that was when talking about Midland Red buses one could never boast about how warm they were. Even with heaters you froze and this D5 had no heating and there is even ice on the inside glass upstairs.
Posted by christopher at 13:07