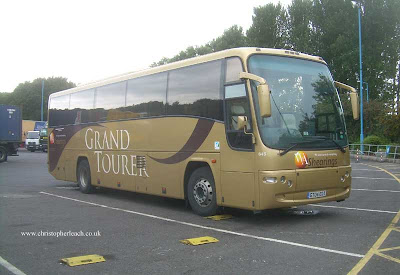 Even though I don't dislike the current Shearings inky-blue livery which is a lot more distinctive than the old cream colours with some lettering, I was certainly sad to see the demise of those unmistakable Wallace Arnold Volvos when the two big coaching names merged. But I had often admired the Shearings/WA Grand Tourer coaches as they trundled down the M6 going in the opposite direction at weekends for they seem to have a definite WA feel about them. Fortunately I was able to catch a photo of one of them resting at the Bristol, Gordano Services when I was heading away to Devon in August.
Posted by christopher at 11:37