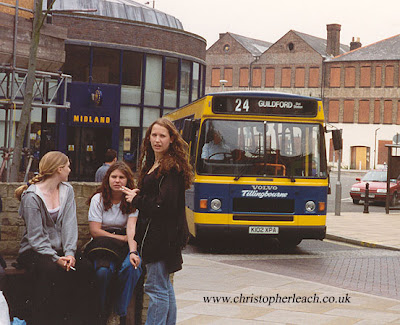 Bemused looks from some local girls one Saturday Morning in Guildford but as well as taking them I wanted to get a bus in the picture and the historic building in the background too which was once the old Dennis Factory. I wonder whatever happened to Dennis, got swallowed up like the rest of them by Leyland I expect. Of course Alexander Dennis although not really the same company is still very much alive and is now Britain's main flag waver in the bus industry and by the time Leyland Bus had finally been absorbed by Volvo it was not much bigger than some of the smaller manufacturers it took over in the Sixties and Seventies. It's enough to make you want to emigrate.
Posted by christopher at 16:03