Clear away the rubble and weeds flourish 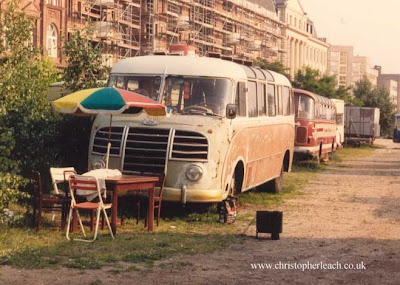 I'm not saying anything nasty about this old Setra or the Alternative Community that lived in it, but for a time when the most intensively managed strip in the whole of Berlin was bulldozed in the name of freedom it reverted to a kind of war-relic or bomb-zone full of old bedsteads, wild-twisting vines, dandelions, litter and the flotsam of society. But this bus from the early-Fifties predated the Berlin Wall by about tens years and tourists must have ridden on luxurious coaches like this to view the sudden rise of this shocking Political Leviathan which in turn became the forgotten corner where another reminder of Germany's past was eventually put-out-to-grass.
Posted by christopher at 03:56