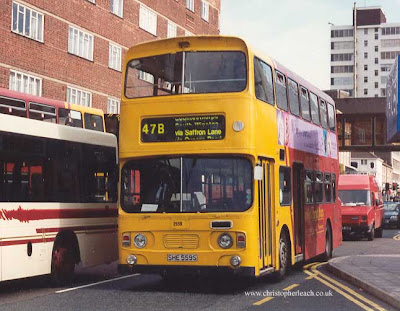 Once the operator's routes in Birmingham and the Black Country had passed to the PTE there was not so much need for Midland Red to employ double-deckers apart from at Leicester where the company shared the urban network of services with Leicester City Transport. Midland Red had standardised on rear-engined Alexander-Bodied Daimler Fleetline double-deckers but under NBC ownership even Leicester was starved of new deliveries after 1971 and there were no second-hand examples either. But maybe had it continued under the former BET ownership later Alexander/Feleetline buses might have still looked something like this later 1978 bus that came from the South Yorkshire PTE following re-privitisation.
Posted by christopher at 08:24