NBC variety at Cannock in 1988 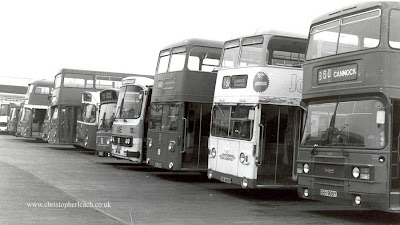 At the time I used to think the NBC was terribly boring but I don't think this interesting view at the Chaserider garage at Cannock was very typical of most garages with just one Leyland National in sight. But vehicles here include a pair of ECW bodied Daimler Fleetlines ordered by Harper Brothers and two of the five Goppel bodied MAN articulated buses that started life with South Yorkshire PTE. Double-deckers were never phased out here and at Tamworth and four of these Park-Royal bodied former London Transport Daimler DMS buses came to MRN from Western National in 1983 to strengthen the fleet.
Posted by christopher at 16:13