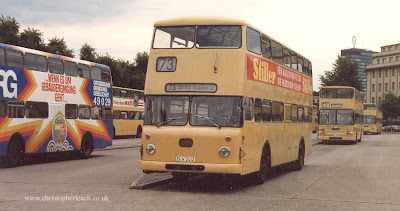 Many things have changed in Berlin since I started going there regularly in the early-Eighties
but there is still a large bus park and canteen behind the Zoo  Bahnhof where one can photograph the buses without pedestrians and other traffic getting in the way.
Favourite buses of mine were these high-revving audibly memorable Bussings which on acceleration
sounded rather like a rocket taking off and which were still being delivered up to 1974 before being replaced by the more familiar MAN also to be seen in this shot.. No.2412 from the
1972 delivery was bound for Britz not too far from Neukolin where the bus was bodied at the Wagon-Union
Works.
Posted by christopher at 07:36