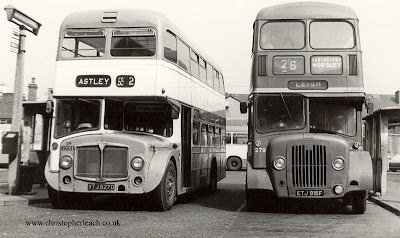 Leigh is situated half-way between Manchester and Liverpool close to the A580 East Lancs Road and lies at the heart of what was once Lancashire United Territory. At one time before it became a part of Greater Manchester, Leigh had a small fleet of about sixty blue and cream buses which were mostly double-deck. Because of height restrictions at the Holden Road garage all these were of the lowheight or lowbridge variety like this East-Lancs bodied AEC Ronown seen at the Bus Station in it's orange and cream Greater-Manchester PTE days beside a typical attractive Northern Counties bodied Guy Arab belonging to Lancashire United.
Posted by christopher at 03:16

In the text linked to Leigh bus station 1980 it is stated that Holden Road/Guest Street garage was the reason for lowbridge double deckers. There was another reason until 1963 - Glazebury station bridge on the George Stevenson Liverpool to Manchester railway which had an arch height of 13 feet 8 inches. Leigh buses on the 5 and 46/47 services passed through it and had to have a clearance.
Frank E. Taylor -
osprey1@talktalk.net

Thanks Frank I didn't know that, but I'm sure the low entry to the garage must have been of greater concern.