A bit of colour on a grey August Bank Holiday: Yelloways in Blackpool 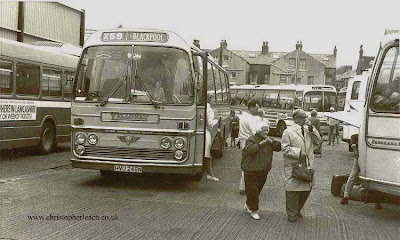 The powers that be in Blackpool want to change it's cheap and cheerful kiss-me-quick image for something equally tacky and tasteless but for the Borough something a lot more profitable and glamorous by turning itself into another gambling paradise like Dallas. I have to say that it's hard to understand why the guiding committee should have chosen Thameside or was it Salford for the New Super Casino when Blackpool was the obvious choice and Manchester has enough problems as it is. At one time they used to call Labour The-Nanny-State but they seem more like a Devil's Advocate than the Tories ever were. But like it or not Blackpool does need something dynamic to give it that big kick in the pants. Also of course once you've lost your house, savings and the kid's inheritance too you can always jump off the end of the pier It wouldn't matter much to me anyway what they did as there's very little to go there for now for so many the very traditional British bus related things that drew me there like a magnet have gone including for example the arriving AEC Reliance and Leopard coaches of Yelloway at the Coliseum Bus Station.. Wait a minute, did I read somewhere that Blackpool has old trams?
Posted by christopher at 03:36