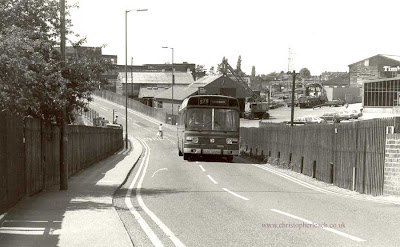 As a youngster and through the Sixties I was 'bus mad' but the changes brought about by the 1968 Transport Act stopped me in my tracks for with the new regime came the death of much of the bus scene as I had known it. The new National Bus Company in particular turned the colours of old bus companies with fine traditions into a kind of unappetising dollup of school food, one version pea-green and the other looking like weak tomato soup. I also hated those grey wheels so I gave up photography for ten years, but two things restored my interest. Firstly I wanted to catch some images of the last of the half-cabs before they were gone and including in 1979 as funny as it may sound now the fast dissappearing London Routemaster!. But the other discovery was much more significant, it was a book by Ray Stenning called 'A National Bus Company Album'. Not only did the book write more about the places and the world the buses worked in it included interesting illustrations from the best bus photographers each with their own distinctive style. My favourite by far was Tom Moore but this now historically interesting shot of Midland Red National 525 heading back towards Stafford Town Centre on the Doxey Road is pure Tony Moyes. Indeed whenever I find a nice spot and wait for the bus that never seems to come I always think he would have been more organised than me. As for the view, even though the old railway bridge in the background over the main West Coast Line with it's sharp bend turning across the main gate of the Universal Grinding Wheel Company is still there, the other bridge the one I was standing on and which once with the other span formed a kind of giant roller coaster took you over the now long time closed Uttoxeter Branch Line. It too is no longer in use and stands beside a new bit of flat road like some stranded ancient monument. What's more significant even the trackside landmark, the once large Henry Venables timber yard has moved and the vast site is now an upmarket housing development big enough to get lost in but boring enough not to notice.
Posted by christopher at 05:40

Tony Moyes would have cropped that.

A bit perhaps, especially the foreground and maybe the uninteresting fence to the left but he did like distance shots too. I think he would have been pleased with this one Hmself.