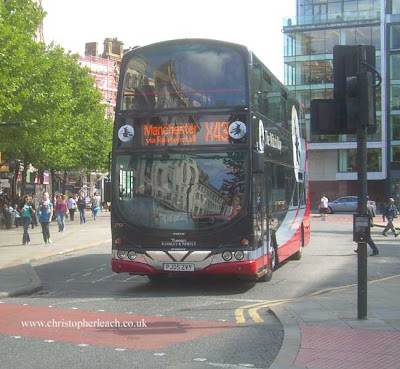 Not surprisingly even though they bring back fond memories some of the buses we used to love don't always quite come up to scratch by modern standards because they were perhaps so slow, noisy and cold. Still they all can still charm us on the right day and only the most churlish would also throw in the comment that they were never this well loved being so clean and smart looking in preservation. Well nobody can say that about these two vehicles from very special operators of the Manchester to Burnley X43 Service. Southdown might have been the most prized BET Operator in the genteel South but here in Lancashire Ribble was king and the two not only had rather special coach fleets they also ran full-fronted double-deckers based on the Leyland PD-Chassis. Ribble's first lowbridge White-Lady coaches were in fact the less powerful O600 PD1 and I was surprised how when carrying it's well-appointed East Lancs body it still romped up the Staffordshire Hills with little difficulty on this year's Potteries Bus Running Day. By contrast the Burnley and Pendle Wright bodied Volvo looks more like something out of BBC Television's Torchwood than a mere bus and I'm sure not even Southdown or Ribble would manage to keep these buses looking quite so immaculate.
Posted by christopher at 14:00