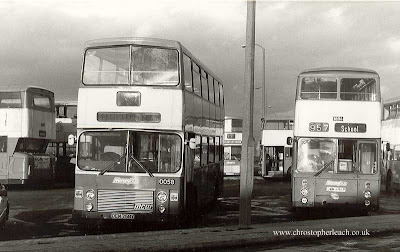 I was lucky when I did deliveries with my van during the Eighties as I quite regularly had to go passed the large open-air bus garage at Green Lane in Liverpool. It doesn't seem that long ago but it was a time when there were still many places nobody ever minded you wandering around and I even remember during the Sixties being allowed to walk around the Edge Lane Works too collecting numbers. Easy-going or just lax nobody seemed to care too much about anything in Liverpool but Health and Safety concerns have even reached the Mersey by now I expect. As I had a darkroom at home I loved taking black and white pictures of buses in the various seasons. I have to admit to doing a bit of Spotting with my camera too and I have almost every example of certain favourite batches. At Green Lane I was particularly after the old stuff but I can never resist a good picture fortunately and here is an Alexander R-Series Metrobus bought for evaluation and a more typical Liverpool bus the Leyland Atlantean. .
Posted by christopher at 08:28