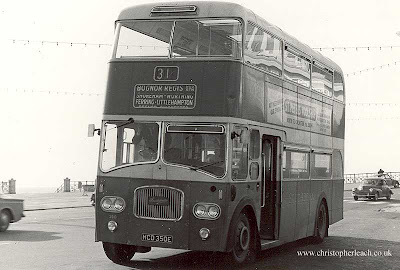 Make a list of enthusiast's favourite double-deckers and I suspect the fleet of full-fronted Northern Counties bodied Leyland PD3's delivered to Southdown will be near the top. The Queen Mary's were certainly a very attractive bus and when the final batch arrived with curved glass and panoramic windows it might well have been a disaster but amazingly it looked very good. In theory the retention of the flat front should have made the whole design look odd but thankfully the operator chose this dumbed down version to the prototype No.250 that had been delivered in 1965 complete with a curved lower screen. Like many others I feel this attempt to gild the Lilly was a something of a folly as it is not possible to improve on such a beautiful bus but from the public point of view it must have seemed like progress. However as usual I tend to prefer the slightly eccentric buses to their more pedestrian counterparts as the commonplace is dull and like renovating an old building the best feature of this design had been preserved. No.350 was caught on the Brighton Sea-Front close to Pool Valley Bus Station in the winter of 1968-9.
Posted by christopher at 15:45

And this vehicle still survives today, a photo taken in 2007 on Worthing seafront

Thanks, I'm so glad it survives as all the Queen Mary's were favourites of mine including the panaramics.